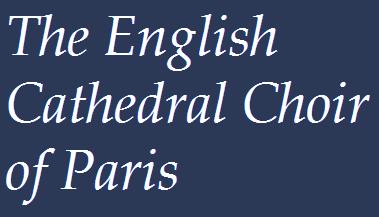 Founded in the late 1980s, the ECC rapidly found itself performing in festivals such as Dinard, Meaux and the Paris Festival d'Art Sacré, with its first appearance on TV in a programme for Christmas. From the 1990s on, the choir went on French radio (Radio-France) on a number of occasions — Musicora, Musiques et Cultures, broadcast services. It featured also in the 900th anniversary celebrations of the choir school of Salisbury cathedral, and took part in festivals in Champeaux, Nancy, Lunéville, Auvers–sur–Oise, Forqualquier and the Normandy abbeys, along with music by Palestrina and his English contemporaries, marking the composer's 400th anniversary in the church of Saint–Louis–en–l'Ile, in Paris. Concerts included music by Purcell, Haendel and other English composers, along with Christmas carols in the Sainte–Chapelle, Saint–Severin and the cathedral of Dijon, and in 1998, the choir was joined by a large chorus and orchestra in the church of the Madeleine for the grand premier of Un couronnement à Westminster (A coronation in Westminster).

The 21st century found the choir back at the Madeleine for a performance of Britten's Cantata Saint Nicolas with a large choir and orchestra, and starring British tenor Robert Tear in the title rôle. Then came the 50th anniversary of the coronation of Queen Elizabeth II, followed by Her Majesty's 80th birthday and the centenary of the Entente Cordiale. Other highlights included the 500th anniversary of Thomas Tallis, one of the first performances in France of John Stainer's oratorio The Crucifixion, and further tours in England, taking in Evensong in Winchester cathedral and Sherborne and Milton abbeys.

On the occasion of the 1500th anniversary of the death of Saint Genevieve, a cantata devoted to the patron saint of Paris, composed by Odile and Christopher Wells was first performed in the church of Saint–Denys–du–Saint–Sacrement in March 2012, followed by performances in the Parisian churches of Saint–Louis–en–l'Ile, Saint–Laurent and Saint–Étienne–du–Mont.

In 1996, a group of young adults, several of whom had sung as children in the choir adopted the name Wells Consort, participating in the majority of the choir's concerts with works that required a smaller ensemble of more experienced musicians. The Consort went on to include secular music in its repertoire, and this is particularly popular in venues such as stately homes, châteaux etc.